I love reading romance novels. What I love about them is the story, yes, but also the tension, the pull of two people coming together. To me, there is a fine line of how much sex is to be had and when in the story this should happen. I tend to like the sexy time to be after the 50% mark, but there are books that I absolutely adore that are the total opposite. Why am I droning on about this you ask? Well, there are books that I read and Taste by Kris Bryant happens to be one where the story was doing pretty darn well, and then the bow chicka wow wow takes place and boom the book falls apart.

Katherine “Ki” Blake is finishing up her culinary degree. Ki has one last class to go before she graduates and becomes a chef. When she meets her new teacher, South African chef, Taryn Ellis, she is instantly attracted and can think of little else. Ki’s hot, Taryn’s hot and both give each other smoldering looks all class long. You get the drift. Add in the fact that teacher/student relationships are frowned upon and Taryn needs this job because the schedule works well for her, since she is the single mother to a six-year-old daughter. Conundrum!

Around the 35% mark, I thought the book was going pretty well. I thought some of the culinary topics were a little over detailed and the dishes were pretty simplistic for a chef. To much fried chicken talk. It felt very cooking showish. I can get past that, fine whatever. What I had trouble with is that this relationship is taboo while Ki is Taryn’s student. Fine, realize you are into each other, but wait eight weeks to do anything about it. Build the angsty tension. I love the angsty tension!!! Don’t show up at your teacher’s house for sex then cry about it when she turns you down, but then jump into the sack anyways! NO!!! Well then the book just became basically erotica. Lots of monkey sex. Lots of the p has two ss ends in y word. Is that sexy to people? It’s just not to me. Drop the F-bomb like a mother but leave the p and c words at home.

Overall the book is written fine. I liked Bryant’s last book but my personal tastes may have just not line up with Taste. There will be people that like this one, I did not hate it, it just didn’t float my boat. The plot was thin and the main characters lacked chemistry. 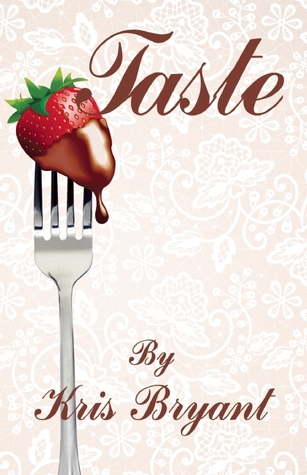