Olivia is back, Olivia is back! If you liked or loved Flight SQA016, just get ready because Grounded is a sequel that completely surpasses its predecessor. I know, this is a rare feat, law of diminishing returns and all, but I am here to tell you it has been done.

Well, you know Olivia is back. She is also a bit broken. Where we left her in Flight SQA016, she has just royally screwed up with Emily. Remember, she railed Emily for being a neglectful parent for putting her son in a coach seat on a transatlantic flight. She was an ass and she knows it. Where we pick up a few months later in Grounded is where you start to see some of her character development begin to really flesh out. She accepts her mistake but her heart has been filleted. Losing Henry and Emily in one fell swoop has taken her down several pegs and given her more humanity. She is in emotional pain but has resounded herself that her misstep with Emily has lost her chance with them forever. She totally deserves whatever heartache she must endure. Life has a funny way of bringing folks back together and when her plane crashes into the tarmac, yup it crashed, a set of events unravels to bring these two leading ladies back together.

When we meet back up with Emily, she’s blocking her emotions about Olivia out. Unfortunately for her, sticking your head in the sand ostrich style doesn’t really work with five-year-olds. Henry wants his friend back, and to say he is persistent is an understatement. Her life hasn’t got any easier either. The debt is only growing exponentially, and even with a new day job, she not putting a dent in it. You got it! Emily is no longer serving drinks to the high fliers. Henry’s less that scrupulous grandfather has come into the picture demanding visitation for himself and his wife with the young boy. Emily, not wanting another drawn out custody battle, acquiescingly agrees to his request and in return is awarded a desk job with one of his cronies. Strings attached, boy are they attached, and it gets ugly!

No worries though for all the drama surrounding the two leading ladies their chemistry is still off the charts. It takes a bit for out two mains to come back into each other’s lives, no too long, but once they do you have that epic back and forth dialogue that makes you fall in love with them all over again. Olivia’s quirkiness is still infuriating and adorable to the quick-tempered single mother. Henry and Simon, of course, are there to give the story more depth and lightheartedness.

If you were worried on how Radley would seem the two book together after Flight SQA016’s unsatisfying ending, I’m here to tell you she did it better than I could have ever imagined. Grounded has fantastic pacing, and the layers of the story build to give you an amazing love story. Oh, you’re worried about the ending? Well, don’t be, I promise this one will leave you with a smile and some tiny butterflies. 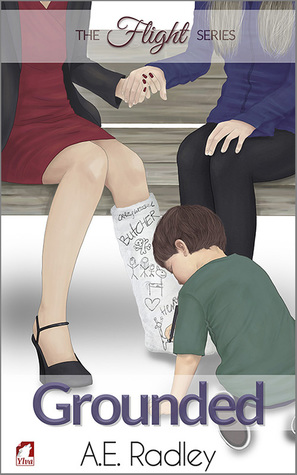