Blayne Cooper is an amazing writer. Her books are so good! Her latest book, Blind Side of the Moon, I literally bought without even reading what the plot was about. I didn’t need to, I knew without a shadow of a doubt that this book would be amazing. I was absolutely right, it was!

Samantha Blackwell is a high school junior that has recurring dreams that she knows are important. She just doesn’t know why or what she’s supposed to do with what she has seen. As the dreams begin to get more frequent and more detailed she learns through her mind’s eye that her dreams are about a classmate being stalked. She knows without a doubt she has to help, but she doesn’t know who she can get anyone to believe her.

Jane Hutchens is from one of the most prominent families in town. She feels like an outsider in her perfect little family. Her siblings, the twins, are the most popular kids in school. Jane is lucky if anyone even looks her way. Super smart Jane spends most of her time in a book. So when Samantha drops a bomb on her about being stalked she balks at the outrageousness of the situation. that is until the notes and text messages become so frequent and intense that she just can’t ignore the danger lurking.

So the premise of the book is a stalker on the loose and Samantha, who can at times foretell the future befriends Jane to help catch the madman before he hurts her. Oh, but it’s so much more than that. This book has amazing characters who have depth and soul. While they are young these two are also mighty. Both, Jane and Sam are so well developed and you really get to know their emotions. These are strong young women that you cannot help but love and root for.

While Blind Side of the Moon is a mystery filled with twists it also has a romance that is every bit the mystery’s equal. The love story is so sweet, it pulls at your heart strings time and time again. While the two characters are young, they are both wise in so many ways. The ending is left open a bit, so I hope that we will see more of this dynamic duo.

Blind Side of the Moon
by Blayne Cooper

To Purchase: Blind Side of the Moon 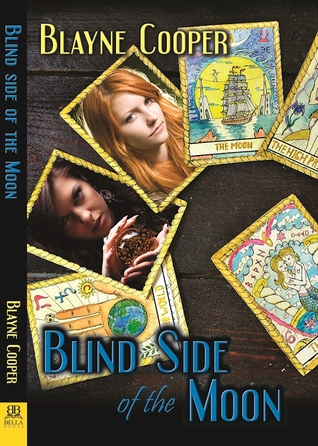 Stranded by Blayne Cooper is a wild adventure in the jungle of Venezuela. This book is fun and witty and will have you rolling with laughter. Blayne Cooper has definite skill in the writing department. She knows how to tell a great tale.

There are three key players in Stranded, Miranda Gutierrez, Rachel Michaels and Nora Butler. Miranda is 17 year old Venezuelan soccer player. She is on the brink of stardom in the game of women’s professional soccer. She has been wooed by many of the professional teams, but has chosen to play for the Denver Dragonflies. Miranda is the reason that that Nora & Rachel have come to Venezuela, securing her contract and squelching her parents fears of their baby living in America.

Nora is the Assistant General Manager of the Dragonflies. This ex-soccer player has given up a lot to get the Dragonflies up and running. Their inaugural season has been blood, sweat and tears, and she is hell bent to get this team to be the best it can be. Nora is to consummate professional, that is, until she sets her eyes on Rachael Michaels.

Rachel is a Denver radio disc jockey that has the number one morning show that she co-hosts with her ex-husband. Rachel has just taken on a second job as the announcer for the Dragonflies. She has been flown down to interview Miranda for an upcoming press release. Rachel is funny and the entire book is told from her point of view. Rachel exudes hilariousness throughout the book, and her combo of feisty and funny is awesome.

All hell breaks loose when Nora, Rachel and Miranda are gifted an adventure into the wilderness of Venezuela. I won’t spoil it for you, but literally the ladies become stranded. They must fight to survive and get themselves back to civilization.

Oh wait and yes there is a romance. Nora and Rachel each have a plethora of baggage they are carrying around, but neither can deny their attraction to each other. Nora is instantly attracted to Rachel, and she does not hide her desire for a vacation romance. Rachel takes a little longer to warm up to the idea, especially since she has sworn off having a relationship with a woman. Their romance is slow, but it is fun and neither ladies shies away from conflict. These two will battle it out until the happy ever after.

I loved how Blayne Cooper does not make a big deal of Rachel’s sexuality. Nora takes it in stride and so does Rachel. There are not any contrived stereotypes or insecurities, it is what it is. These are two ladies who have chemistry and feel drawn to one another. I know when I pick up a book by Blayne Cooper is going to be well written and a damn good read.

Natalie Abbott is a young college professor, who has gotten her career on the fast track to tenure. She has worked and studied tirelessly to get ahead in life, while coming from a childhood of poverty. One day visiting her mother, she learns that her step-brother has dropped out of high school and has skipped town with his girlfriend and headed to New Orleans. So what would any big sister do, she heads down to the Big Easy prepared to drag his dumb-ass home.

Natalie’s contact with NOLA PD is Detective Adele “Ella” LeJeune. Ella is a cop through and through. Her heart is 100% into helping the people of NOLA, and she will stop at nothing to help Natalie find her brother.

The story follows the lives of Natalie and Ella over the course of two years. Issues in the missing brother’s case keep bringing the ladies back into each others lives. Both of main characters are well developed and you really get to know their emotions and why they are the way they are. They are flawed but they are resilient. These are strong women you will read about, emotionally and physically. This is not your woman in peril type of novel. Blayne Cooper gave her characters depth.

While The Dark Horse is a mystery filled with twists and turns it also has a romance that is every bit the mystery’s equal. No part of this book felt rushed or glossed over. The story is long enough (you are definitely getting your money’s worth) so that Ms. Cooper can work her magic. The love story is so sweet, it pulls at our heart strings. Isn’t that what we are constantly searching for in reading the romance genre! SOOOO GOOD!!!