I picked up this book a few weeks ago, not really reading the description but going off the fact that KG MacGregor always puts out quality material and it usually covers interesting or thought provoking subjects. This book could have easily been picked off of the last few weeks headlines about the travesty and cover-up at Baylor University. Sadly, the book was written before that whole nightmare was brought to the public’s attention. This book tackles the horrible problem and aftermaths of rape and sexual assaults on our college campuses. Trial by Fury is a lot of legal and a smidgen of romance. It is very good, very informative and very heavy.

For me this book was good and disappointing all wrapped together. Honestly I don’t think this book is really a romance at all. While two characters, Theo and Celia, do become a couple and fall madly in love, the book isn’t really about that. It is more the legal working of Theo and her staff figuring out a way to make the rapists and the college pay for the crimes and then the mishandling of the victims’ rights..  While the subject is so important and swift action needs to be taken by colleges across America, you do feel like characters weren’t ever really developed, and most definitely the romance was very flat. This book felt very educational, and I could have been reading an in-depth expose. Don’t go into this one expecting to be overjoyed by the love, you will come out smarter than before though. 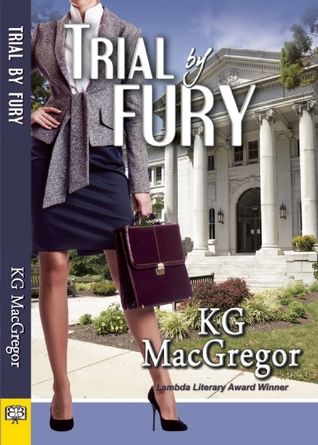 I picked up six books this weekend off of Bella Books Christmas sale. Anyone But You by K.G. MacGregor was one of them. I’m not sure why it has taken me so long to get around to reading this one, it has good reviews, I’m so glad I finally did.

The book covers one of America’s biggest issues, the use of fossil fuels, and in this particular case, oil. K.G MacGregor in my opinion did a good job of telling both sides of the story. This is not a political propaganda book. MacGregor does a fantastic job of outlining the issues, and letting each side tell the story. Wait, I thought this is a romance? Well yes, it’s that too.

Cathryn Mack is the PR Director for Nations Oil. She is a 44 year old, smart, sexy, established woman who has to claw her way to the top. The oil business is a good ol’ boys club, and Cathryn has had to work hard to stay on top. She is one step away from executive level, and she has put in 22 years with Nations Oil to get to the point. Cathryn now finds herself headed Duluth, Minnesota to deal with an oil pipeline that has just busted and is spilling into a local lake.

Stacie Pilardi, the other protagonist in the story, heads up a an environmental activist group called CLEAN. Stacie has made her life’s work holding big businesses accountable for the messes they make in regards to the environment. Stacie grew up wealthy, and she has put her wealth to good use. She uses smart, ethical tactics to let the general public know of the problems that have been created when we don’t protect Mother Earth.

These two ladies should be adversaries, not lovers, right. Well a chance meeting on a dating site, leads them right to each other. Both ladies meet and have several hookups, before the truth of what they do for a living gets brought to the table. By this time they are already developing feelings for one another. You’ve been sleeping with your biggest rival, yikes!

What I liked about this book is each of two leading ladies didn’t buckle to the other one’s political beliefs, like grownups they were able see past this hurdle. They respectfully held their ground on agreeing to disagree. The romance is nice and sweet, and they each have mutual respect for one another in spades. I thought overall it as an interesting read, but if I had one gripe the chemistry between the two characters was a little weak to me. They do jump into bed early into the book, and it works for the story, but personally I like the buildup. Overall, a nice well written book.

Anyone But You
by KG MacGregor
Amazon Link: http://amzn.com/B00M27BONQ

This book was a wealth of information. KG MacGregor blew my mind with the details. The book was like nothing I had ever read before in lesbian romance genre. It was wonderful and refreshing.

The book starts introducing us to Mila Tordov. Mila is a 27 year old, super smart engineer/scientist that has her heart set on going to Mars. This is her life dream since she was a young girl. She is persistent and unflappable. If you look up the term dogged determination you would find a write up about Mila Tordov. She is a fascinating character, the author made her so believable, and so multi-dimensional. Nothing is cooler that smart woman with a ton a self confidence, and Mila has it in spades.

Our other female lead is Jancey Beaumont. Jancey is a former NASA astronaut, that basically did some pretty heroic stuff on a former space mission while she circled the Earth for a year. She is famous, and Mila’s childhood hero. Jancey is 43 and she is prickly! She only wants one thing in life, a mission to Mars. I will say Jancey took quite some time to grow on me, way longer than Mila.

This book’s awesomeness is based in the details. It is so detail oriented, a goof like me who avoids science at all costs, was mesmerized. I wanted to go to space (I actually think space sounds horrendous, but for the course of T-Minus Two I was into it). The processes that the Mars mission applicants go through, fascinating!

The only thing negative I can say about this book is the romance between the two leads fell short to me. I felt like it wasn’t developed enough. I would have liked more dialogue that made me feel like the romance wasn’t mostly just a one-sided crush on Mila’s part.

T-Minus Two is a wonderful novel. KG MacGregor outdid herself.