The Lavender List is set in 1946, just a year after the Nazi regime has defeated and the Americans have left Europe. This was a time of economic prosperity for many Americans after years of tumultuous foreign affairs and finally fully recovering from the Great Depression. You also have the beginning of the Cold War and the undeniable fear of the Communist regime. Why the history lesson, cause welcome to a book that is going to tackle it all while wrapped up in a delicious story filled with spies and Hollywood beauties.

Amelia Maldonado is a starving actress working at a local diner to pay her bills. She spends her days wiping down tables, pouring coffee and waiting for her crush, Laura Wright, to walk through the door. Her dream is to finally make it on Broadway. This Brooklyn girl has spunk in spades. She knows what she wants, who she wants and has dogged perseverance of making it as an actress. Amelia also has an another side to her, a rough and tumble girl, who’s past involves robbing banks and driving the getaway car. This Brooklynn girl knows the local mob boss, well because he is her uncle. This character is one to cherish, she’s multifaceted, she has depth and she is no one’s damsel in distress. She’s pretty easy to love!

Laura Wright is an undercover spy for the CIA. Laura spent her youth in the war, fighting Nazi’s and doing whatever it takes to win the war. She’s intelligent, she gorgeous, she is literally James Bond in a skirt (minus the British accent of course). While Laura is emotionally distant, Amelia is the one person that can crack her ultra-tough exterior. Amelia can see who she really is, and notices just the slightest of changes in her demeanor that cue her into to how Laura truly feels. She sees past the character she often plays and often calls her out on it often. My perspective is that Amelia is the one person who is Laura sees as her equal.

As serious as the issues of war, McCarthyism and a litany of others the book at is core is not really about that. As serious as those issues were the book has a lighter tone. The book is more a fun action packed adventure with two leads that have serious chemistry. This story is unique in so many ways. The best part though is it grabs your attention and your heartstrings, it doesn’t get much better than that. 5 stars

**I have been borderline obsessed with the presidential election for months. Needless to say, my mind was blown and my heart was broken when I realized that Mr. Trump would be our 45th president. My emotions have been all over the place, and still are, to be honest. I picked up this book as a way to escape the turmoil. So if you read this review, Meg Harrington, I just wanted to thank you for giving me a great book to escape into during really shitty week. 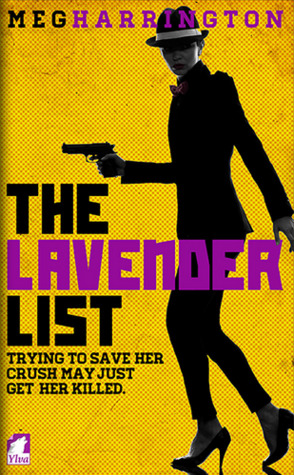