Easy Nevada is one badass mother bleeper. She has zero moral compass! Totally broken, she chunked that sucker years ago. What she is though is a take no prisoners, hilarious, shoot you in the face tomb raider. Easy is smart as a whip and tough as nails. When she sets her sight on something, she’s going to do whatever it takes to make it hers. She is like no other character I have ever encountered.

Quick Plot Overview: Easy has her sights set on an artifact buried in a newly discovered pyramid in Sudan. She plays the part of a journalist to get access to the dig site and meets the gorgeous and super annoyed, Dr. Candice Cushing. She is really annoyed that Easy continues to refer to her as Candy but that is part of the tomb raiders insufferable charm. Candice’s mother is a Sudanese woman, and she wants more than anything to give back this piece of history to Sudan. Easy just wants to rob it! Then one night everyone’s plans are foisted when ISIS shows up to stop everything and kill everyone.

So you can probably guess that this book is one hell of a ride. Understatement of understatements. Crazy, zany, wackadoodle, smart, awesome, badassness! Yeah, it’s all that and so much more. I love Georgette Kaplan’s style of writing. It’s fast, it’s smart, sarcastic and so different from anything else out there. She is one of my absolute favorite writers. While all of her books have been great, this one is out of the park good. I am so ecstatic that this one is a series. I cannot wait for the next adventure with Dr. Cushing and Easy Nevada. 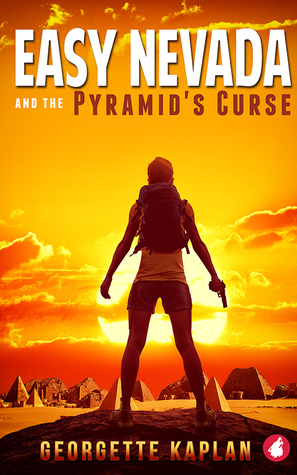 Bombs in the forms of human beings! Whoa nelly, say that again. Yup, this book is about humans that are being turned into walking, talking bombs. Touch these poor souls and boom! Talk about freaking scary as hell.

Trigger by first time author Jessica L. Webb is an action packed adventure. She does not write like a newbie, Wedd has a great writing style, and her story telling is outstanding. I started this book late one evening and read well into the night. This book grabbed my attention, and even though I needed to go to bed, I had a hard time putting it down. With that being said this book is frighteningly good!

Kate Morrison is the Chief Resident of Vancouver East Emergency Room. Kate’s entire world is thrown the moment Joe Caglioni walks into her emergency room. This walking human bomb is suffering and in a terrible amount of pain but insists on not being touched by Dr. Morrison. Adding to the chaos is the appearance of Sargent Andy Wyles of the Royal Canadian Mounted Police. She has just showed up insisting the same thing, no touching the patient. Goodness, so what does any great doctor do, heck yeah, she hits Joe right in the chest to restart his heart, she will not stand by and watch someone die without giving it her best shot at saving them. Guess what the bomb did not detonate! Without spoiling the book I will say Kate has a special gift that resulted out of tragedy. Kate and her special attributes are now a thrust into a mystery which she along with Sgt. Wyles must race to solve. Who is making this army of human bombs and what is their diabolical plan?

The book reads very well and is full of heart pounding, adrenaline racing moments. I have zero clue if human bombs can be actually made, but Webb 100% sold me on the possibility through her story. I was held captive throughout the book, desperately needing to know how this was all resolved. While the romance is very good, it is not the whole focus of the book. Let me say what romance there is in Trigger is utterly fantastic. So subtle and extra sexy. This book has action out the wazoo, but it doesn’t stop there. Mystery, intrigue and a fantastic couple are in full force as well.

Natalie Abbott is a young college professor, who has gotten her career on the fast track to tenure. She has worked and studied tirelessly to get ahead in life, while coming from a childhood of poverty. One day visiting her mother, she learns that her step-brother has dropped out of high school and has skipped town with his girlfriend and headed to New Orleans. So what would any big sister do, she heads down to the Big Easy prepared to drag his dumb-ass home.

Natalie’s contact with NOLA PD is Detective Adele “Ella” LeJeune. Ella is a cop through and through. Her heart is 100% into helping the people of NOLA, and she will stop at nothing to help Natalie find her brother.

The story follows the lives of Natalie and Ella over the course of two years. Issues in the missing brother’s case keep bringing the ladies back into each others lives. Both of main characters are well developed and you really get to know their emotions and why they are the way they are. They are flawed but they are resilient. These are strong women you will read about, emotionally and physically. This is not your woman in peril type of novel. Blayne Cooper gave her characters depth.

While The Dark Horse is a mystery filled with twists and turns it also has a romance that is every bit the mystery’s equal. No part of this book felt rushed or glossed over. The story is long enough (you are definitely getting your money’s worth) so that Ms. Cooper can work her magic. The love story is so sweet, it pulls at our heart strings. Isn’t that what we are constantly searching for in reading the romance genre! SOOOO GOOD!!!